On a recent walk here in Sedona, I was asking God-Spirit about an incident where what I had thought was ‘love’ that I sent to another person – was perceived as a personal insult or ‘attack’ of some sort. It had hurt my heart that what I had said and felt with love in a playful manner I thought had been ‘misunderstood’.

Here’s an important part-lesson for me: If that person is not open or ready to receive that energy at that moment – they have to block it to protect themselves from it. How do we block ‘Love’? With reacting towards it. With retaliating with it’s opposite ‘hate’ or ‘anger’. Have you ever had someone ‘block’ your love or caring? Didn’t they have to ‘shut off’ or ‘shut down’ or ‘shut out’ that love by a block of negative feelings towards you?

Well, I ‘saw’ how this spiritual energy physics worked on a deeper level than I’d ever seen before. I asked Spirit what would be a better way to work with the energy of love in that case – and Spirit suggested to simply feel the love, and express it if you want, but don’t direct it into another person, but simply express it outward around you and then other people can choose or not choose freely to feel or not feel that energy of love. Only when directed by your heart, God-Spirit, and the other persons heart, is it ‘safe’ or ‘mutual’ to share love with others in a penetrating-direct way.

Ah…thank you…that will allow me to be open with my love when I want but not ‘push’ it on anyone else who may not want to feel that at that time.

A couple of weeks later I was walking again along the same path – this time on the way out from the canyon. There was no one else around except I could see about 100 yards ahead a man and his dog. I had the thought of ‘sending love’ to the dog. I checked with my heart and it felt intuitively safe and ok with the dog. So I simply sent directly ‘into’ the dog my ‘love’, my heart feelings. I just did this a little bit, for a few steps. When I reached the place where the man and his dog were he said to me:

“She just had to see you. I don’t know why – She must think she knows you or something. She just wouldn’t leave until she had seen you and she’s never done that before.” – and he shook his head like he couldn’t understand the way his dog was acting this way.

I said: “Well maybe she does know me, or maybe she thought I was someone else.” – I didn’t want to say anything about my little ‘experiment’. I petted her and we exchanged some more ‘love’.

Later I realized that the dog had stood and waited for me on the exact spot on the path where a couple of weeks earlier I had received the ‘hit’ – the understanding from Spirit about how the spiritual energy physics of ‘love’ works. 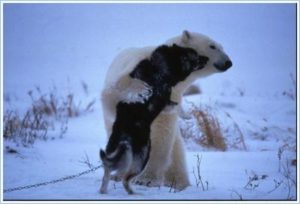 Here’s a dog that knows how to use ‘love’ to make friends!!